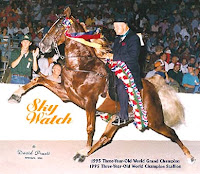 Now grab a tranquilizer, a box of tissue and your barf bag as I relate to you the tragic tale of the Big Lick Tennessee Walking Horse (TWH). They are used and abused for no other reason than to win big bucks in the show ring.

The Big Lick show circuit is a multi-million dollar industry which benefits everyone but the poor horse. The bigger an exhibitor’s “sponsorship” the more likely he is to win. If that sounds to you like the judges are being bribed, you have the picture.

Just ask Ross Perot who has won countless championships at the Celebration – the most “prestigious” Walking Horse Show in the country. The Humane Society of the United States calls it “the cruelest horse show in the world.”

The Walking Horse is the only breed in the country that is required by law to have U.S. Department of Agriculture inspectors monitor the horse shows. The Horse Protection Act was passed in 1970 to prevent the exhibition of “sore” horses.

“Soring” is the intentional infliction of pain to a horse’s legs or hooves in order to force him to perform an artificial, exaggerated gait known as the Big Lick. The pasterns are “treated” with an abrasive chemical such as hot mustard oil, salicylic acid, fuel oil and other petroleum products. 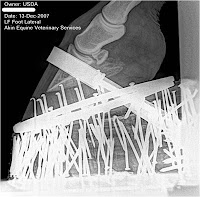 To produce an even bigger lick, unethical trainers also use pressure shoeing. The hooves are cut painfully short, almost to the quick, and a foreign object is inserted between the hoof and the shoe – something like a golf ball. This places a tremendous and painful amount of pressure on the hoof.

Metal chains and weights are also strapped on the pasterns to affect the desired gait. They rub against the already sensitive skin, increasing the horse’s pain so that he picks up his feet more quickly and lifts them even higher. To escape the pain in front he shifts his weight to his hind end. 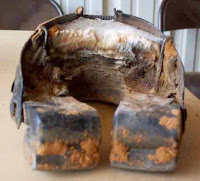 “Stacking” is another form of shoeing. Stacks can be made from rubber and plastic and can be as high as five inches. These are nailed to the hoof. To keep the stacks on, metal bands are used across the hoof which increases the pain. When removed the entire hoof is torn off.

In a newer kind of pressure shoeing, trainers force a horse to stand on concrete with blocks of wood or other hard materials taped to the sensitive surface of his hoof until she is in so much pain that she can’t bear weight on her front feet.”

Yet another “training method” is stewarding. A horse’s handler will deliberately hurt a horse to get him to stand still during inspection. The theory is that if pain is inflicted on another part of the body, he won’t notice the pain in his feet. Pipes are often used for this barbaric practice.

The Horse Protection Act (HPA) established a designated qualified persons program, to inspect horses at the shows. This is like letting the fox in the hen house. While many of them are caring and ethical, far too many lie like some of our politicians and are crooked as many of the judges. Money talks.

More and more organizations are protesting these medieval practices. At great risk to their persons and property former Big Lick trainers are speaking out against an industry that mistreats horses just to win the blue. Barns have been burned, people beat up and horses killed or stolen.