Conspiracy theories don't hold much appeal for me. While they may contain a small sliver of truth, they're rarely supported by conclusive evidence. So, it is not without some degree of hesitation and trepidation, if not a little irony, that I promote my own conspiracy theory. Except that it isn't just mine alone. All one needs to do is google "fascism in America" to find millions of articles pointing out the similarities of what is occurring in the United States today to what happened in 1930s Germany.

Before venturing any further, however, let me emphasize that Godwin's Law does not apply here. Even it's most ardent users and abusers don't seem to have a clear understanding of its meaning, often bringing it into play as a means of "distraction, diversion or even censorship."

The evidence that we are moving toward fascism is so overwhelming that it cannot be written off as mere paranoia or as just another kooky conspiracy theory. Nor can all the craziness, lies, ugliness, racism and assaults on our freedoms we've been observing over the years be dismissed as mere coincidence. It should be obvious to the most casual observer that years of organizing and planning has been taking place behind the scenes for a very long time - all supported by bookoodles of money. 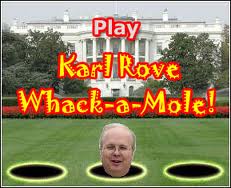 Lately, however, liberals have been forced to play a fast forwarded version of the Whack-A-Mole game. As soon as one "mole" - lie, racist remark, legislation, attack on labor and women's rights, and a slew of other nasty moles -gets whopped down, up pops another. And then another. We've been so busy whacking away at all these moles we haven't been able to pause long enough to look at the whole game board.

"History has shown, time and time again, that severe hardship opens the door for social change – but when illiteracy and a sold-out press converge with desperation, a situation we now confront, demagogues and charismatic figures inevitably rise from the crowd and promise revenge to the bewildered, scared and angry populous.

This is exactly what is beginning to unfold in America today. Half of the adult population cannot read a book written at an eighth grade level. 20 percent read and write below a fifth grade level, meaning they are functionally illiterate. Is it any wonder why Bill O’Reilly or Rush Limbaugh or the Tea Party are gaining so much momentum? A huge proportion of the unemployed do not understand why they lost their jobs, and they are very angry. In effect, they become receptive to the buffoonish talk shows that repeatedly tell them it’s the immigrant’s fault. It is this simplistic view of reality they seek. . . .

A lot of Americans are legitimately angry. They want answers, and the only answers they hear are from radical Christian radio or insane, right wing fanatics. The frightening ideology imparted by the lunatic fringe of the Republican Party makes not the slightest sense: they say the answer to our problems is small government yet do not question the massive security apparatus. They espouse austerity measures for reducing the deficit yet military spending is somehow exempt from that equation. It is utterly irrational. But that dos not matter. It appeals to people who have lost faith in reality. It offers an emotional grounding and a vent for anger. It offers inclusion and something to fight for amid decline. It empowers a kind of hope in a future Utopia that promises to return to the “good old America.” It preaches that, in this idealism, all can become wealthy and famous if you just work hard enough and uphold Christian values. . . .

We stand on the cusp of fascism – an age when corporate oligarchs orchestrate a right-wing populism that will turn our political system into a corporate totalitarianism.

Written by Tristan Aaron Shaw, a 19 year- old student who's "deeply distressed" about this countries future.

Read that last line again. If it were just a case of stupid remarks from Sarah Palin, Michele Bachmann and Sharon Angle, there would be no grounds for a conspiracy theory. Yet, there might be a reason McCain chose Palin, and a reason behind Bachmann's election to the House of Representatives and Angle's near win over Harry Reid. The male dominated GOP are using such brainless women, who may or may not be attractive, as tools, but they're not smart enough to see it. They serve as cheerleaders to whip up the crowds, get them angry and afraid, and get them motivated to go to the polls. It's all part of the grand plan.

The conspiracy, however, is much broader than this. Like a pandemic, it has spread from Congress, to SCOTUS, to state governments, to municipalities and on down to school administrators. And, as Tristan Shaw so accurately points out, it is being orchestrated by corporate oligarchs such as the Koch Brothers and Dick Armey and organizations such as the Heritage Foundation and the Cato Institute.

Plowing through all the evidence that, taken as a whole, substantiates we are being threatened by a fascist takeover, is akin to opening Pandora's Box. The amount of evil that pops up at every turn is truly staggering and yet I've barely scratched the surface. No doubt readers will question why this or why that isn't mentioned in the following sections. The obvious answer is that even though I have only focused on just the past two or three years, it would take a book the length of War and Peace to cover it sufficiently. Many has been the time that the whole project was almost scrapped just because of the sheer weight of the evidence.

The original intent was to strictly adhere to the 14 characteristics of fascism from Dr. Lawrence Britt that were covered in Part One (and which was published exactly one month ago today). Not everything, however, fits into neat little categories and either I've been forced to add a few or to drop a couple altogether. So, I've chosen to use his excellent piece as a guide only. It's well worth reading, if visitors haven't done so already.


The GOP leadership is un-American, period. And they specialize in holding the American people hostage. Their total disregard for America is made quite evident by the fact that every time the GOP wants to push one of their unpopular initiatives they begin to strangle a segment of the American people for leverage. . . .

Both the methods and propaganda of the GOP are not only un-American, but right out of the Nazi playbook.