Tennessee Jackasses and Jennets Vote for the Real McCoy in Primary

Hee haw! Tennessee Democrats sure don't need GOP dirty tricks to lose an election. They seem quite adept at kicking themselves in the ass without a lick of help from the fright-wing. Yes, sirree Billy Bob.

As unbelievable as it may sound, my fellow Tennesseans just voted for an anti-gay conspiracy theorist to run -- not for dog catcher or the beer permit board mind you -- but for the U.S. Senate against Republican Bob Corker. Face it, in this increasingly bright red state a Democrat probably wouldn't have a chance in hell of defeating Corker, but can we at least make a serious effort here so we don't end up looking like a herd of jackasses and jennets to the rest of the nation? 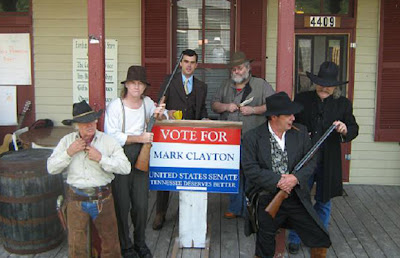 Clayton, third from left, and his 2008 Campaign Posse

Mark Clayton won the primary election with just 26% of the vote despite raising no money and listing the wrong opponent on his campaign website.  [Don't bother linking to it; a message says it's exceeded its bandwidth.] According to an article in Mother Jones, however, it reads "DEDICATED TO THE DEFEAT OF NEO-CONSERVATIVE LAMAR ALEXANDER." This is from Clayton's 2008 failed attempt to win the Democratic nomination. Remember this.

Among his fringe-nut theories, Clayton believes "the federal government is building a massive, four-football-field wide superhighway from Mexico City to Toronto as part of a secret plot to establish a new North American Union that will bring an end to America as we know it." In 2008 he issued a press release accusing Google of censoring his campaign site on behalf of the Chinese government. Further, he believes that "Schwarzenegger, born in Austria, wants to amend the Constitution so that he can become president and fulfill Hitler's superman scenario."

Clayton is associated with the hate group Public Advocate of the United States -- another one of those family values organizations. Mother Jones informs us that his elusive campaign site states he is:


against national ID cards, the North American Union, and the "NAFTA superhighway," a nonexistent proposal that's become a rallying cry in the far-right fever swamps. Elsewhere, he warns of an encroaching "godless new world order" and suggests that Americans who speak out against government policies could some day be placed in "a bone-crushing prison camp similar to the one Alexander Solzhenitsyn was sent or to one of FEMA's prison camps."

Well, gee guys, thanks for letting the voters know, even if it is a day late and a few thousand dollars short. And your suggestion to just write in a name? Any ol' name? Wowzee, now there's a thought.

In a phone interview with TNDP chair Chip Forrester the Nashville Scene asked about the vetting process and how a guy like this gets this far. Forrester explained about the low number of signatures required to get on the ballot and then went on to say:


We have a very small window of five days after candidate paperwork is filed and there are 99 House seats, 33 Senate seats, nine congressional seats. So we have five days to withdraw or not allow a Democratic candidate to be placed on a ballot. And it's also a slippery slope to keep a candidate off the ballot. And frankly, we didn't expect him to win ... he had spent no money. But with turnout so low and [him] at the top of the ticket and his ballot placement as a "C", it gave him, because nobody knew who these candidates were, an edge to win the primary.

Really? You didn't expect him to win? So, you just sat on your heinies instead and did absolutely nothing to educate the public about each of the seven candidates which nobody knew. I guess we should be grateful that the accused pedophile came in last, eh?

When asked if he thought it was fair if people blamed him or the state party for this debacle, Forrester responded:

We did not get involved in the primary, we don't get involved in primaries, so we had a number of candidates that filed and it's a difficult mountain for us to climb when your Republican opponent has that kind of financial resource.

If the TNDP doesn't get involved in primaries, why spend all that time talking to prospective candidates, especially if you're not going to share pertinent information with voters? Just because Republicans have more money is no excuse for giving up and doing nothing. Democratic operatives just have to be and act smarter which, when you think about it, shouldn't be too hard. One thing for sure, the powers that be in the Democratic hierarchy cannot afford to be lazy.

Obviously, Tennessee needs to revamp it's election laws. Requiring only 25 signatures to get on a ballot for dog catcher might be acceptable but it's laughable in a race for the U.S. Senate. And obviously voters need to be better informed about the candidates. That's where the local yokels come in -- or should come in.

Of course, there's always that slim possibility that this was a Republican dirty trick, but I don't think so. I think it was simply a case of incompetence and ineptness on the part of the Tennessee Democratic Party leadership with a little non-help from the national Democratic party.