A Nation at War With Itself

On my last piece about Tennessee Current Events, one of my good blogging buddies offered up some sound advice to help bring me out of the doldrums: "get thee from Facebook".

Squatlo's premise was that while the social network attracts good people from all political persuasions, it has an equal number of trolls "who seem to be lying in the weeds waiting for any excuse to pontificate on behalf of Jesus or Ronnie Reagan or Bill O'Reilly at the drop of a hat."

True, true, and true. The problem is that I actually derive quite a bit of pleasure from Facebook. As I explained, "I have configured my FB page so I get lots of news, most of it things I wouldn't have known about otherwise and not just politics. Biography, history, art, medical, scientific, you name it."

Along the way I've made quite a few friends who I thoroughly enjoy and who have added to my limited collection of knowledge in ways I never dreamed possible. 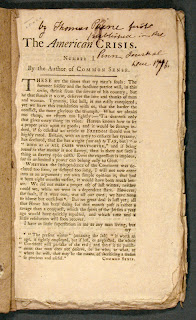 If I weren't on Facebook, most likely I would have missed this most extraordinarily powerful essay. Carol Baker, The Opinionated Bitch and a superb writer by anyone's standards, takes a leaf from Thomas Paine and talks some common sense about the state of America today. She is a voice of reason at a time when we need it most. She speaks to me and for me.

She begins by admonishing us to forget the Middle East, Iraq, Iran, etc.
"Forget them," she says. "We are a nation of people who can't stand one another. We can't stand a fair portion of our fellow Americans."


So, when did it all change? Oh, it had been brewing for some time, thanks to the carefully orchestrated John Birchers and groups like them who had been waiting for the perfect moment to set their best laid plans in motion. I can tell you the exact day, the exact hour and the exact moment it all came to a crescendo: September 11, 2001 at 8:46 am, when five hijackers flew American Airlines flight 11 into the North Tower of The World Trade Center. Everything that has happened to this country since has been connected in the collective spiderweb of the American conscience. That was the moment fear set it and it became acceptable to openly hate Muslims. No matter the irrationality of lumping anyone who even looked Middle-Eastern into that broad group. It worked for their purposes of creating the perfect divide and conquer strategy in America – and it worked beautifully.

After quoting Thomas Paine, Carol explains that she has spent the last couple of months seeking out a little "Common Sense" of her own.


. . . every time I see the word “patriot”, I throw up in my mouth a little and I find that sad. The word used to mean “someone who stands by America”. Now it means, “only people who think like me and if you don’t like it, you’re a Nazi who should either be imprisoned or shipped out of the country”. I despise false equivalencies, the old “both sides do it, so it’s okay”. There is some of it from both sides, though anyone who tells me it’s done with equal frequency or fervor is blind or lying.

So far, so good, but it gets better as Carol describes an encounter with a fellow non-believer who accuses her of being as bad as a Nazi sympathizer with a "Pollyanna complex." Her response truly resonates with me along with her rather plaintive admonition:  "This is what polite conversation has devolved into . . ."

Carol continues as she expounds on the "anti-everything" crowds: the anti gays, the anti abortionists, the anti-gun-control fetishists, and she concludes with a ringing indictment of the the anti-voting rights bunch:


If the Voting Rights Act is nothing more than a “racial entitlement”, then logically, I must ask:

Are laws against rape nothing more than “gender entitlements”?

Are laws against pedophilia nothing more than “youth entitlements”?

Are laws against dangerous working conditions nothing more than “labor entitlements”?

It turns out there’s been a change of dress code for the Ku Klux Klan… when appearing at the Supreme Court, black robes are the accepted couture for their duly appointed representatives.