Nelson Mandela: His Day Is Done

Nelson Rolihlahla Mandela
1918 - 2013
I've spent a lot of time looking at this photograph and reflecting on this man's life. I see kindness and gentleness in his face, deep intelligence and uncanny wisdom in his eyes. I see character. And dignity. And grace. I see a man with immeasurable intestinal fortitude and strength of character. A man with unfathomable nerves of steel. And a man, like everyman, not without flaws.

In my eyes, the Black Pimpernel was bigger than life itself, so how presumptuous would it be for this unsophisticated white woman in the heart of Red Neck Bible Country to even attempt to capture the essence of the man?  Besides, millions of words have already been written about the life of Nelson Mandela - movies made and songs written. Anything I might add would be redundant.

Instead, let's look at a couple of articles that capture Mandela's influence on other peoples and generations and how the history of South Africa very much parallels our own.

Jelani Cobb writes in the New Yorker about Mandela's politics of forgiveness, and compares him to other revolutionary leaders of his time and to our "kindred histories":


To an extent greater than most Americans recognize, but which Nelson Mandela understood implicitly, the United States and South Africa are products of kindred histories: both founded by settlers, both emerged from wars to overthrow British colonialism, both forged national identities on their respective frontiers. Before the election of Barack Obama allowed this country, albeit briefly, to indulge the idea of postracialism, Mandela was revered here as a proxy for the American past. His capacity to emerge from twenty-seven years in prison without bitterness broadcast the hope that this country’s own racial trespasses might be forgiven.

. . . the architecture of apartheid was explicitly modelled on America’s Jim Crow system of segregation. Decades before Reagan rejected sanctions against the regime or Dick Cheney denounced Mandela as a terrorist, this country had planted its feet firmly on the wrong side of South African history. When Mandela declined to press charges for the past, it was not just white South Africans he was absolving.

Interestingly, just as more radical black organizations accused Mandela of placating whites after the demise of Apartheid, the same types of criticism were and still are leveled at the first black president of the United States - a man  who "began his public career agitating on behalf of the man who became the first black President of South Africa." Hopefully, however, our president will not have to "view the trajectory of "other anticolonial movements" from prison. 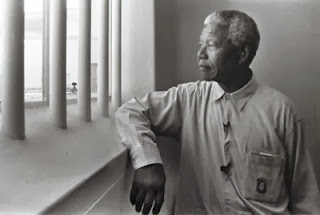 It’s entirely reasonable that the first black President of the United States began his public career agitating on behalf of the man who became the first black President of South Africa. It’s also consistent that Barack Obama emerged as a Presidential contender on the strength of the Mandela-esque speech he delivered to the 2004 Democratic National Convention, in which he opined that there was no black America or white America, simply the United States of America. Such sentiment was no truer in post-apartheid South Africa than it was in the United States that night, but it does suggest the political potency of redemption. Mandela has been praised in this country largely for the moral principles he calls to mind. A good part of that adoration, though, is owed to the moral felonies he allowed this country to forget.

Listen to Nokuthula Magubane, a member of the born free generation, as she is being interviewed in her comfortable suburban living room 45 minutes east of Johnnesburg:


“Yes, we were oppressed by white people; yes, it happened; yes, it hurt,” Ms. Magubane said while Mr. Mandela was still clinging to life. “But let us forgive each other so that we can move on fully and contribute fully to the South Africa we want to see in the future.”

Nokutthula's generation are called the born frees, known as millenials in other countries, and were born after or right before the end of Apartheid. Also known as the Mandela generation, they tend toward optimism and "insist that their determination to look to the future and not the past is the greatest tribute they can pay him."

“We are constantly reminded of what happened directly by those who were involved in the struggle — as a means of keeping us loyal, they brainwash us by continuously reinstilling fear about what the ‘white man’ has done, about how much pain was caused, how much suffering their generation suffered,” wrote AkoLee, a blogger who says she was 6 in 1994, when Mr. Mandela became president. “They say we are ungrateful for not thinking the same way they do, for questioning what the ‘black man’ is doing.”

Do not older African-Americans who survived Jim Crow and who participated in the Civil Rights movement also worry that the young people of today don't fully appreciate the suffering that their parent and grandparents endured?


Most black South Africans 20 years ago would not have recognized the life that Ms. Magubane leads. A third of her friends are white. She has known many of them since she started school. She calls her white choir leader “Tanni Christine,” or “Auntie Christine” in Afrikaans.

As for Mr. Mandela, she said: “We have seen his example, and now we’re going to follow it. We’re going to take it one step further into the future, and we’re going to build the South Africa that he would have loved to see.”

Maybe, just maybe, the glowing enthusiasm and optimism of youth is indeed the highest tribute this generation of South Africans, and  following generations, can pay Mr. Mandela.


His Day Is Done: A Tribute to Nelson Mandela
By
Dr. Maya Angelou