Republicans and the Dunning-Kruger Effect 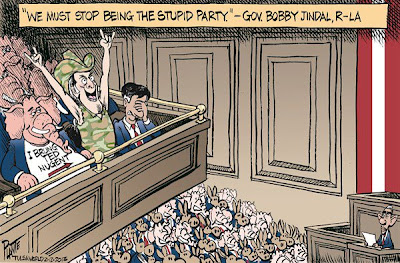 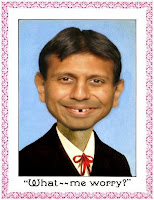 Jindal's remarks came barely a week after the House Republicans had a retreat at the Kingsmill Resort in ole Virginny where they had a panel discussion on "Successful Communication With Minorities and Women." No kidding? In the year 2013, the Republicans need a seminar on how to communicate with women and minorities?

Of course, Republicans blamed their craziness on Obama while not only giving Jindal a pass for helping transform the GOP into the party of stupid but by ignoring their own stupid contributions.

As my mom said more than once while I was growing up, "Some people are too stupid to know they're stupid." This was long before there was anything known as the Dunning-Kruger effect. The D-K effect occurs when incompetent people not only fail to recognize that they're incompetent, but they consider themselves much more competent than everyone else. Or, as Forest Gump famously stated: "Stupid is as stupid does."

Just since the first of the year, I've documented nearly a hundred sightings of  the D-K effect on Republicans. Whether it's the war on women that doesn't exist, science, the Second Amendment (and here), state sovereignty, Obamacare, more of the war on women that isn't, election rigging, or the Constitution according to Gohmert, or, or, or -- you guessed it -- or the war on women -- there it is in all its shining glory, in all its cocksure stupidity, and  in all its arrogant know-nothingness.

Education is where the stupids seem to excel the most. Regardless of whether it has to do with creationism, or prayer, or atheism, Republicans are determined to make believers out of  today's students -- to the detriment of the country and future generations. If they can't succeed through the legislative process, by golly, they'll sneak it in. If a Republican isn't trying to reintroduce prayer in schools, others are demanding students pledge a loyalty oath in order to receive their high school diplomas.

Outshining them all is Tennessee's own Stacey "Don't Say Gay" Campfield. Beyond stupid, this southern transplant now wants teachers to inform parents when their kids are gay and is proposing that food be snatched away from kids on welfare if their grades are unsatisfactory.

Apparently, Tennessee is set to lower its already dismal education ratings "as education officials and lawmakers tidy up details on how to outsource the local school boards’ responsibility to vet and approve charter schools to an outside agency."

Politicians aren't the only ones who suffer from the Dunning-Kruger effect. One sees it in the comment sections after articles and on social networks from Fox News viewers and faithful followers of Glenn Beck and Rush Limbaugh. Who knew non-medical maladies were contagious?

Bobby Jindal and Newt Gingrich can call for rebranding their party until they're blue in the face, but, as Andrew Rosenthal writes, they


. . . . both seem to assume that those who oppose the Republican Party don’t object to Republican programs and goals. They just don’t understand the G.O.P. message. If that’s not “insulting the intelligence of voters” (as Mr. Jindal put it), I don’t know what is.

In his speech Jindal himself may have provided the ultimate example of the Dunning-Kruger effect when he declared that the Republicans are "a populist party." As Paul Krugman responds:


No, you aren’t. You’re a party that holds a large proportion of Americans in contempt. And the public may have figured that out.

I used to think Republicans were just arrogant, and while I still think they're arrogant, I believe it's because they're too stupid to know they're stupid. They can rebrand themselves all they want, but in the end, they're just like processed food: underneath the new packaging is a bunch of the same old toxic chemicals.