War Is a Racket

Smedley Darlington Butler, 1881-1940, was an incongruous choice for an outspoken anti-interventionist. When he retired in 1931 as a Major General he had spent 34 years in the U.S. Marine Corps., and was the most decorated Marine in U.S. history. He spent the remainder of his life writing and traveling around the country, and speaking before veterans, pacifists and church groups. 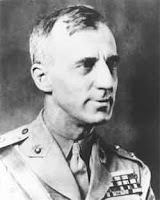 Butler was known for his outspoken views against war profiteering and what he viewed as nascent fascism in the United States. His views on the subject are well summarized in the following passage from a 1935 issue of "the non-Marxist, socialist" magazine, Common Sense.

I spent 33 years and four months in active military service and during that period I spent most of my time as a high class muscle man for Big Business, for Wall Street and the bankers. In short, I was a racketeer, a gangster for capitalism. I helped make Mexico and especially Tampico safe for American oil interests in 1914. I helped make Haiti and Cuba a decent place for the National City Bank boys to collect revenues in. I helped in the raping of half a dozen Central American republics for the benefit of Wall Street. I helped purify Nicaragua for the International Banking House of Brown Brothers in 1902-1912. I brought light to the Dominican Republic for the American sugar interests in 1916. I helped make Honduras right for the American fruit companies in 1903. In China in 1927 I helped see to it that Standard Oil went on its way unmolested.

War Is a Racket, c. 1935, was one of the first works describing the workings of the military-industrial complex. Perhaps a forerunner to the book is this speech he delivered in 1933. Some exerpts:

War is just a racket. A racket is best described, I believe, as something that is not what it seems to the majority of people. Only a small inside group knows what it is about. It is conducted for the benefit of the very few at the expense of the masses.

I believe in adequate defense at the coastline and nothing else. If a nation comes over here to fight, then we'll fight. The trouble with America is that when the dollar only earns 6 percent over here, then it gets restless and goes overseas to get 100 percent. Then the flag follows the dollar and the soldiers follow the flag.

I wouldn't go to war again as I have done to protect some lousy investment of the bankers. There are only two things we should fight for. One is the defense of our homes and the other is the Bill of Rights. War for any other reason is simply a racket.