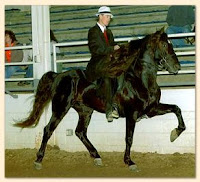 The Tennessee Walking Horse (TWH) was bred for his endurance, docile temperament and his extraordinarily smooth ride - absolutely no bouncy-bouncy. Developed by middle Tennessee plantation owners in the 19th century, the horse could travel at high speeds between rows of cotton and tobacco without damaging the crops. In those days he was referred to as a Turn Row or Plantation Walking Horse .

The beauty of the TWH - besides his gentle nature and good looks - lies in the three gaits. He is best known for his running walk which can reach speeds of 10 to 20 miles per hour - and with no bouncy-bouncy. The horse glides; he does not trot. 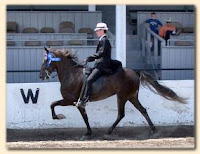 Now known as the Plantation Walking Horse, he is used for endurance competitions, trail rides, and by mounted police and outfitters. He is also used for show. One of my favorite divisions is the Champagne Class where the owners set out to prove they have the smoothest horse in the world. At the end of the class, whoever has the most Champagne left in their plastic wine glass wins and they get to drink the rest. Well, so does everyone else actually.

The flat-shod natural gaited and naturally trained horse is the true Tennessee Walking Horse – no matter what he's called. There’s a saying that’s been around for awhile: you can ride all day and dance all night. So true. I had four of them and you can’t find a sweeter breed or a smoother ride.

Don't be puzzled by the head nod. You want a nodding fool because it indicates a longer stride which means a smoother ride. This is a perfect example of a flat-shod Tennessee Walker. Remember: Natural.