"Is Our Children Learning (Again?)"

If it ain't broke, don't fix it. Or -- if it ain't broke, break it. In a field which has been fraught with innovative "new" ideas for the past fifty years, where the students have been guinea pigs for one "cockamamie" theory after another, there's been a lot of breakage. With the invasion of technology in the classrooms, Southern Beale argues: "As we embrace the new, let's not ditch the old." I concur with my fellow southerner entirely but unfortunately I have more questions than answers. 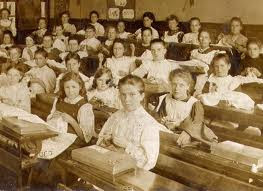 (Note: Have had a few problems with the formatting but don't let that deter you.)


The New York Times has an interesting piece on today’s front page about the use of costly technology in classrooms, and how it doesn’t appear to be improving test scores at all. Some suggest standardized tests no longer adequately reflect the kind of skills students are learning in tech-heavy classrooms. Others say there’s no replacing the fundamentals — reading, writing, arithmetic — and that must come before teaching kids how to use PowerPoint.
It’s an important discussion because, as the piece points out, school districts are facing intense budgetary pressure right now, laying off teachers and increasing class sizes, while at the same time investing millions of dollars in classroom computers. Is it worth it?
These discussions interest me, but they also anger me. When I look back on my own elementary education, which was way back in the 1960s, I remember feeling like a lab rat. Back then it seems the country was focused on looking at what and how we were teaching our children, with an eye toward innovation and change. I don’t know why — was it broken? Was there something wrong with the way my mother and father were educated? Was it just the idea that it’s the 1960s and we can do things better just … because?
It seems to me there wasn’t a cockamamie idea that someone didn’t want to try on us kids. For example: I was taught to read using the ITA method — Initial Teaching Alphabet. Any other ITA kids out there? Represent! ITA used a phonetic alphabet which was supposed to be easier for young children to grasp. We were taught to read and write with the phonetic alphabet and later transitioned to the traditional alphabet. (I still have some old “Peter Rabbit” books written in ITA. I wonder if they’re worth something now?)
I’m not sure I was a good ITA test case, since I was always a voracious reader, even as a child. Plus, I come from a family of readers and writers. I highly doubt I would have had problems learning to read and write the old-fashioned way. I can’t speak for any other kids, though, and back in the ’60s ITA was what we were taught. Maybe it was good, I have no idea. I do know that I learned to read and write, and I also developed some really atrocious spelling, which stuck with me until around the 5th grade. In fact, my spelling was so bad that when we moved across country, my parents got letters of concern from my new, non-ITA-drilled teachers.
That’s just one example; there are others. Maybe it’s because of where I grew up, but I remember a parade of graduate students and teaching assistants streaming through our classrooms and pulling selected students out of class for their turn on the hamster wheel. These things were never explained to us, and when in second grade I was asked to paint pictures with one of these graduate students instead of learning the math lesson, I was pissed off. I was quite sure whatever the rest of the class was learning was way more important than what the young woman wanted to learn from me. Guess I was a rebel even then.
So when I read we’re spending millions of dollars investing in computers only to find that test scores haven’t budged, it pushes some buttons. On the one hand, test scores mean … what exactly? Does it really reflect anything significant? On the other hand, I worry that with Bill Gates and Steve Jobs shoving computers at school districts, we’re creating a generation of consumers for Microsoft and Apple, but not necessarily a generation of educated, engaged citizens.
Please, tell me what is the point of this:

CHANDLER, Ariz. — Amy Furman, a seventh-grade English teacher here, roams among 31 students sitting at their desks or in clumps on the floor. They’re studying Shakespeare’s “As You Like It” — but not in any traditional way.
In this technology-centric classroom, students are bent over laptops, some blogging or building Facebook pages from the perspective of Shakespeare’s characters. One student compiles a song list from the Internet, picking a tune by the rapper Kanye West to express the emotions of Shakespeare’s lovelorn Silvius.

Does this make sense to any 7th grade English teacher out there? For one thing, we didn’t study Shakespeare in 7th grade — that came in high school. Regardless, shouldn’t Shakespeare be an entry point to learning about English history, poetry, the English language, the dramatic arts, and literature? Not … how to write a blog or a Facebook page?
Am I being too “offa my lawn” here? I mean, no wonder kids’ test scores aren’t changing if this is how the technology is being used.
Along these lines, the current issue of Harper’s has an essay on education by Garret Keizer, newly returned to the public high school classroom after a 14-year absence. One of the changes he discusses is his students’ new aversion to reading:

It’s nothing new that some kids find reading a chore. What strikes me is the frequent lack of correlation between the ability to read and any inclination to do it. That, and the number of times I hear someone say, “I hate to read.” A girl tells me so in private and sobs so preposterously that I worry I might laugh. After she calms down, I gently suggest that she read a passage aloud. Her fluency is impeccable; she could work for the BBC.

Modern technology requires a minimal level of literacy, and as our communication moves more toward electronic devices, blogs, etc. the ability to read and write in English is crucial. But just because you can write a text message or update your Facebook wall, that doesn’t mean you can write a novel or a play. And I think writing a novel or play are important skills to have, even if our technology now only requires a literacy level of 140 characters or less. Because you don’t enlighten the world with a Tweet. You don’t create an educated citizenry capable of challenging the status quo in 140 characters, or in a text message. Revolutions may be Tweeted but their genesis is elsewhere. Does it surprise anyone to learn that Thomas Jefferson was a fan of Shakespeare? I daresay he was never asked to create a mixtape for his favorite Shakespearean character.
What I fear we have here is another example of our current emphasis on math, science and technology over the humanities. I’ve written about this before (notably in 2009 in my post, “The Business Of Dehumanization”), but it bears repeating: we’re creating a generation of worker bees and consumers, but not necessarily a generation of citizens with the critical thinking skills necessary to challenge the establishment when necessary.
Ask yourself who this serves? Microsoft, sure: but does it serve America?
I suspect our standardized tests haven’t evolved apace with this change. So pardon me for being concerned when I read this in the New York Times:

Advocates for giving schools a major technological upgrade — which include powerful educators, Silicon Valley titans and White House appointees — say digital devices let students learn at their own pace, teach skills needed in a modern economy and hold the attention of a generation weaned on gadgets.
Some backers of this idea say standardized tests, the most widely used measure of student performance, don’t capture the breadth of skills that computers can help develop. But they also concede that for now there is no better way to gauge the educational value of expensive technology investments.

For now. Yes, of course. But wait for the day when a new barometer of achievement comes to our schools. One that reflects this shift in priorities. One that better reflects the needs and wants of Microsoft and Apple and Google and Coca-Cola. What then?
I don’t have any answers. I’m not saying don’t use computers in schools, don’t teach technology. But I do think we need to go into this with our eyes open. As we embrace the new, let’s not ditch the old. Think about what we could lose in the process.
[UPDATE]:
To those who don’t make it all the way through the Times article, I leave you with this chilling excerpt:

“Let’s hope the fiscal crisis doesn’t get better too soon. It’ll slow down reform,” said Tom Watkins, the former superintendent for the Michigan schools, and now a consultant to businesses in the education sector.
Clearly, the push for technology is to the benefit of one group: technology companies.
The SellersIt is 4:30 a.m. on a Tuesday. Mr. Share, the director of technology at Kyrene and often an early riser, awakens to the hard sell. Awaiting him at his home computer are six pitches from technology companies.
It’s just another day for the man with the checkbook.
“I get one pitch an hour,” he said. He finds most of them useless and sometimes galling: “They’re mostly car salesmen. I think they believe in the product they’re selling, but they don’t have a leg to stand on as to why the product is good or bad.”
[...]
This is big business. Sales of computer software to schools for classroom use were $1.89 billion in 2010. Spending on hardware is more difficult to measure, researchers say, but some put the figure at five times that amount.
The vendors relish their relationship with Kyrene.
“I joke I should have an office here, I’m here so often,” said Will Dunham, a salesman for CCS Presentation Systems, a leading reseller of Smart Boards in Arizona.
Last summer, the district paid $500,000 to CCS to replace ceiling-hung projectors in 400 classrooms. The alternative was to spend $100,000 to replace their aging bulbs, which Mr. Share said were growing dimmer, causing teachers to sometimes have to turn down the lights to see a crisp image.Mr. Dunham said the purchase made sense because new was better. “I could take a used car down to the mechanic and get it all fixed up and still have a used car.”
But Ms. Kirchoff, the president of the teachers’ association, is furious. “My projector works just fine,” she said. “Give me Kleenex, Kleenex, Kleenex!”