States' Rights: the right to be poor, fat, ignorant, and so much more

"The South shall rise again." Sho'-nuff, Bubba. Dream on. These states' rights states don't put much stock in progress - they're too dead set on taking the country back - way back - all the way back.

In a recent article, CNN writer Jack Cafferty asks, "What does it say that most of the ten poorest states are Republican?" I might add, "and mostly Southern."  Cafferty based his article on one written by Roland S. Martin.

A few ideas come to mind, most of them snarky, but none compelling enough to be definitive. A good question, though, as far as it goes. But there has to be more - more ties that bind, so to speak, and in more than one or two areas.

A wide angle lens is required in order to give us a broader and clearer picture. "Why is it that mostly Southern states have the highest poverty rates, the highest obesity and diabetes rates, the highest number of teen births, and the fewest high school graduates while being the most religious and mostly Republican?" The top ten states' rights states - or the bottom ten, depending on how you look at it - are as follows:

Cafferty and Martin are apparently basing their list of the poorest states on a Wall Street Journal article, which factors in  median income, poverty rates, unemployment, and lack of health insurance for 2009. Doing it this way, Mississippi is the poorest, followed by Arkansas, Tennessee, West Virginia, Louisiana, Montana, South Carolina, Kentucky, Alabama and North Carolina.

If only the percentage of people living below the poverty level is taken into account, however, Mississippi still ranks first but is followed by Arkansas, Kentucky, West Virginia, New Mexico, Alabama and Texas, which are tied, Louisiana, Tennessee, South Carolina and Georgia. Source U.S. Census Bureau.

Obesity
It is well worth the link to CDC because the map begins in 1985 and clicks forward year by year to 2010. The trend toward fatness is quite astounding when viewed in this way. 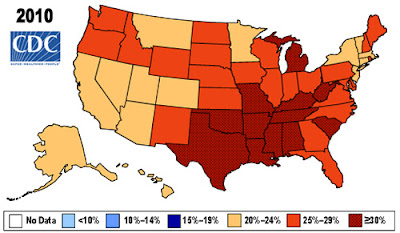 Ironic, isn't it, that these are the very segments of the population who are pushing back against Michelle Obama's school nutrition programs?

From the Centers for Disease Control:

Gallup has slightly different results but CDC doesn't have a chart or offer any kind of statistics by states. When looking at the above map, for example, it is clear that Mississippi has the highest rate of diabetes, but ranks fourth in the Gallup chart below. This lack is unfortunate because it skews the results and doesn't provide a means to compare the direct relationship between obesity and diabetes by state.

Teen Births
According to the Center for Disease Control and Prevention, the United States has the highest teenage pregnancy rate of all developed countries. The states with the highest teen birth rates per 1,000, ages 15-19 are:

High School Graduates
For persons 25 years and older. Reading from lowest to "highest."

How telling that the most religious state has the highest teen birth rate. 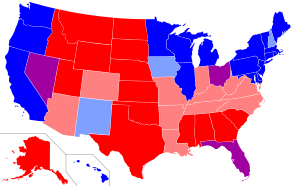 Religion (#1 being the highest)


Which states fall in the bottom ten the most?
Alabama, Louisiana and Tennessee - 6 times
Arkansas, Kentucky, Mississippi, South Carolina, West Virginia - 5
New Mexico and Texas - 4 times
Due to the diabetes mishmash, Mississippi really should be there six times.

So, I ask again: "Why is it that mostly Southern states have the highest poverty rates, the highest obesity and diabetes rates, the highest number of teen births, and the fewest high school graduates while being the most religious and mostly Republican?" Being from Tennessee, I hate to admit it, but I'd venture to guess that blessed ignorance is the single most tie that binds.
Posted by Leslie Parsley at 10/25/2011 10:45:00 AM