As mentioned previously, Republican candidates are not a major focus of this series. The only exception might be if one of them should say something remotely intelligent. While I don't really anticipate such a thing happening, to be fair and balanced please call it to my attention should you hear of such an unlikely event.

That was my intended lede before Ron Chusid at Liberal Values blew it for me by posting this New York Times article on Facebook. Sarah Palin might be just a "pretend candidate" but I find it astounding that she could sputter something that actually makes sense.

And now for this weeks follies.

Arizona Antics (and the only state granted star quality) 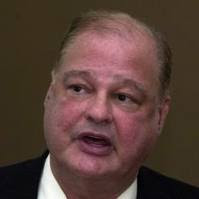 Porky Attorney General Tom Horne is happier than a pig in a bucket of slop whenever he can wallow in investigations and lawsuits. This time his target is the Arizona Redistricting Commission, made up up of two Democrats, two Republicans and one independent chairwoman. Conservatives and Tea Party groups are calling suey and jumping in the sty with Horne. Join the muck for an unbelievable look at Arizona politics in action. With apologies to the very intelligent four-legged variety.

Not all the inhabitants of the Grand Canyon State are whacked out - just the people who run it. The legislature has come up with a grand plan, or scheme, to make crime pay. By charging $25 for background checks -- not the prisoners but the adult family members who visit them.

But wait just a minute here, cowboys. The Arizona legislature passed a bill last year authorizing the expansion of the private prison system. One of the biggest contenders bidding on this 5,000 bed project is Corrections Corps of America who also just happens to donate big bucks in political contributions.

On the Gay Front
Gays in the Obama administration? Oh my God, what is this nation coming to when two attorneys in the Department of Justice who are in same-sex relationships can investigate a case involving whether or not a "religious school is excepted from federal anti-discrimination laws."  National Review blogger Ed Whelan apparently thinks only straight attorneys should be allowed near the law.

In case you didn't know it, "homosexuality is more dangerous than terrorist attacks because we have to deal with it every day. Oklahoma state Rep. Sally Kern says it's more dangerous "because it will tear down the moral fiber of this country."

A North Carolina lawmaker and medical doctor has a different approach: "We need to reach out to gays, get them to change their lifestyle." He treats his homosexual patients just like he does everyone else. "I love them perhaps even more because I know they are going to die at least 20 years earlier."

An anti-gay group based in Massachusetts calls on the Boston Red Sox to withdraw and apologize for its video, "It Gets Better."

Not In My Neighborhood

An al-Jareeza reporter traveling the U.S. to interview people about the impact of 9/11 gets booted from a football game in Booker, Texas.

Always mindful of money matters, Florida's frugal governor Rick Scott is signaling that the state may reject the billions in federal aid that could flow to the state under President Obama's jobs proposal.

Deal or no deal. Nikki Haley, who captured the S.C. governor's office preaching fiscal restraint, is under fire for a week long soire in Europe in search of jobs. Cost: $127,000+. Jobs: 0.

Why on earth, readers might ask, would Governor Rick Perry order schoolgirls in Texas to be vaccinated against a sexually transmitted virus that causes cervical cancer? Because he's concerned about their future health and welfare? Er, nope. How about because Merck, the company which distributes the vaccine, has donated big bucks to his campaigns for governor? Yep.

I have been remiss in not calling attention to a couple of extraordinary blogs. Every Sunday, Infidel753 publishes a list of juicy links to all manner of happenings -- some humorous, some sad, some enlightening and some controversial. It's a good way to spend the day kicking back and exploring. You never know what might pop up.

Another superb blog for links and articles on this particular subject matter is Right Wing Watch. We cross paths occasionally but they are far more vigorous and thorough than this blogger could ever hope to be.

In case it flew under your radar screen, here's a former Republican operative who left the cult and lived to write about it in stunning detail.

Finally, send this link to your conservative friends and family members to remind them of why Nixon created the EPA.

UPDATE: Eric Cantor, on the eve of 9/11, insists on massive cuts to first responders in exchange for federal emergency disaster aid.