Not Voting or Voting Third Party: An Invitation to "Unimaginable and Unprecedented Chaos" 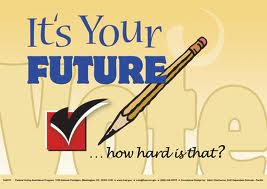 In a Huffington Post blog piece, Governor Jennifer M. Granholm asks and then states, "Not Voting? The Kocch Brothers Thank You."

A new USA TODAY/Suffolk University poll found that an estimated 90 million people won't vote this fall. That's more than a quarter of the population of the United States.

If you're one of those 90 million people, you can certainly choose to reject that right, for whatever reason. You might think you're too busy to vote; or that the partisan fighting makes you nauseous; or maybe you feel your vote doesn't count. But let me tell you: If you're staying at home because you're disgusted by the negative tone of the campaign; or you believe both sides run the same vile, lying, attack ads; or because you're turned off by politics: Congratulations, you are fulfilling someone else's agenda. You are following their plan to the letter.

A 'no vote' is really a 'yes' vote for Romney, Ryan, Adelson and the Koch brothers. 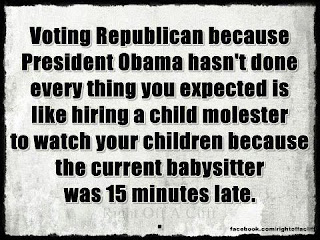 Just as a 'no vote' is a 'yes' vote for the Republicans, so is a 'protest' vote for a third party candidate. The time has come to move beyond ideological purity -- the stakes are simply too high this time around. Voting for a third party candidate will only drain away votes from the one man, imperfect as he may or may not be, who has a chance of beating this juggernaut from the right.

Think of what the impact of a GOP win would be: on Supreme Court appointments, women's rights, voting rights, Medicare, the poor and disabled, minorities, the middle class, food lunch programs, education, environmental protections, deregulation, religious freedom, labor unions, child labor laws, unemployment, peace or war, and the list goes on and on and on.

Writing for The Nation, Erica Alterman puts it this way:


. . . A Romney victory would likely bring with it a large majority in the House and quite possibly a Republican Senate as well, and hence a tsunami of regressive legislation. As the longtime nonpartisan analysts Thomas Mann and Norman Ornstein argue, a Republican victory in November will likely prove a key turning point in modern American history. It will offer Republicans the opportunity, in Mann’s words, to put “in place a radical view of policy that goes well beyond anything Republicans have proposed in the past,” one that has moved so far rightward that “no Republican president in the modern era would have felt comfortable being a part of [it].” What’s more, they will likely succeed owing not only to Romney’s eagerness to blow with whatever winds may be buffeting him, but also, as Mann and Ornstein put it, to his party’s “demonstrated willingness to bend, break, or change legislative rules and customs that have stood in the way of radical change in the past.”


The result, should Romney become president, will be a mixture of policies that favor the superwealthy, punish the poor and middle class, restrict the rights of average Americans, and—I say this without hyperbole—cause a degree of almost unimaginable and unprecedented chaos in virtually every area of American public life. (emphasis mine)

Voting for a third party candidate will not only play smack dab into the hands of the 'divide and conquer' game plan of the Republicans, it will most definitely contribute to "unimaginable and unprecedented chaos in virtually every area of American public life." It is a very real possibility that if the Republicans win, it will be our last free election for generations to come, if not forever.
Posted by Leslie Parsley at 8/17/2012 08:19:00 PM