Laughing All the Way to the Voting Booth

Salon's Joan Walsh echos my own thoughts about the Republican candidate for president, writing that she's "challenged to constantly come up with new superlatives to describe Mitt Romney's latest craven and/or self-destructive move on the campaign trail."

After obliterating Romney's cruelty and inaccuracies, Walsh ends with, "Mitt Romney will never be president," a pronouncement she made earlier this month after Romney's "disgraceful dishonesty in using the murder of a U.S. ambassador to attack Obama."

Of course, as soon as the story broke in Mother Jones, the video went viral, symbolically becoming the shot heard round the world, or perhaps more accurately in this case, the mother bomb of all bombs. And of course, liberal bloggers (just scroll down the blogroll on the right) and media pundits didn't hesitate to help expand the fall-out. [full video]

Robert Reich, after explaining why the video is so important, gives us the "real Mitt Romney:


. . . a fabulously wealthy financier, presumably speaking to other wealthy people (note the waiters scurrying about), with a passion we haven’t before seen in him — saying it isn’t his “job” to worry about Americans who he describes as “irresponsible,” who fail to take care of themselves, and whose neediness is presumably their own fault.

Some of us thought Romney was without core or principle, an empty suit that would say anything to be elected. But here, evidently, is the real Mitt — a man whose core principle is clearly on display, and articulated with deep conviction: social Darwinism — survival of the richest, the hell with those who need a helping hand.

Ezra Klein argues, rightfully, that Romney's "vision of a society divided between “makers” and “takers” is core to the Republican nominee’s policy agenda."


. . .Republicans have become outraged over the predictable effect of tax cuts they passed and are using that outrage as the justification for an agenda that further cuts taxes on the rich and pays for it by cutting social services for the non-rich.


Steven Rosenfeld examines all three videos and does a superb job of knocking off the "falsehoods, lies and misstatements" one by one.

These, and many more, are all excellent articles but the writer who gets the award for coming up with the most superb superlative when describing Mitt Romney is Jonathon Chait -- "a sneering plutocrat." Music to my ears.


. . . the video exposes an authentic Romney as a far more sinister character than I had imagined. Here is the sneering plutocrat, fully in thrall to a series of pernicious myths that are at the heart of the mania that has seized his party. He believes that market incomes in the United States are a perfect reflection of merit. Far from seeing his own privileged upbringing as the private-school educated son of an auto executive-turned-governor as an obvious refutation of that belief, Romney cites his own life, preposterously, as a confirmation of it. (“I have inherited nothing. Everything I earned I earned the old fashioned way.”)

Chait criticizes pundits who have likened Romney's remarks to Barack Obama's 2008 monologue, also secretly recorded at a fund-raiser, about his difficulties with white voters in rural Pennsylvania.


. . . the spirit of Obama’s remarks was precisely the opposite of Romney’s. While Obama couched his beliefs in condescending sociological analysis about how poor small town residents vote on the basis of guns and religion rather than economics, the thrust of Obama’s argument was that he believed his policies would help them, and to urge his supporters to make common cause with them . . . [see article for full-text]

Obama was aspiring to become president of all of America, even that part most hostile to him, in the belief that what they shared mattered more than what divided them. Romney genuinely seems to conceive of the lowest-earning half of the population as implacably hostile parasites.

The revelations in this video come to me as a genuine shock. I have never hated Romney. I presumed his ideological makeover since he set out to run for president was largely phony, even if he was now committed to carry through with it, and to whatever extent he’d come to believe his own lines, he was oblivious or naïve about the damage he would inflict upon the poor, sick, and vulnerable. It seems unavoidable now to conclude that Romney’s embrace of Paul Ryanism is born of actual contempt for the looters and moochers, a class war on behalf of his own class.

It would take a box of toothpicks to keep count of all the times I've heard fright-wingers exclaim, "I don't read that liberal crap" when anyone posts a well documented article which is contrary to their views. While the usual cheering section of the neo-Neanderthals have supported Romney's remarks, maybe the fright-wingers should pay attention to the broadsides from the Republican establishment. This, my friends, is what makes this whole episode so deliciously juicy. 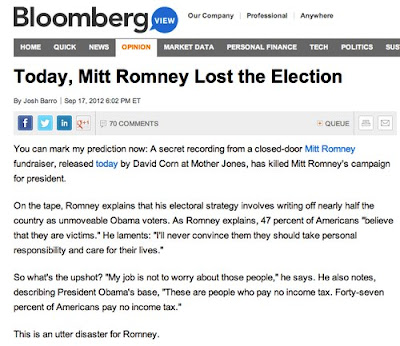 The piece de resistance, however, comes from David Brooks who compares Romney to Thurston Howell, the millionaire on Gilligan's Island, a 1960s television sitcom.

Brooks doesn't claim that Romney is out of touch. Instead, and with careful elaboration, he argues that Romney's comments suggest that he doesn't seem to know much about the country he inhabits or the culture of America, political or otherwise.  Brooks also suggests that Romney has lost any sense of the social compact and knows nothing about ambition and drive.

Throughout the article I was mostly nodding my head in agreement with the author -- until the very end:


Personally, I think he’s a kind, decent man who says stupid things because he is pretending to be something he is not — some sort of cartoonish government-hater. But it scarcely matters. He’s running a depressingly inept presidential campaign. Mr. Romney, your entitlement reform ideas are essential, but when will the incompetence stop?

No Mr. Brooks. He is neither kind or decent. Romney wasn't just denigrating certain minority groups, which he is prone to do and which is bad enough. He was talking about half of ALL Americans, many of them Republicans. His entire history demonstrates that he is a sociopath, a bully, a monumental liar, a sneering plutocrat -- a real horse's ass in other words. 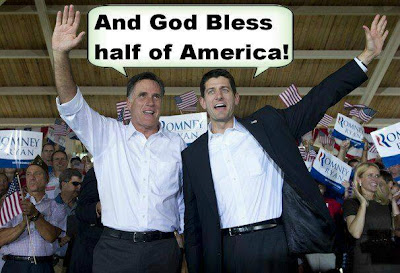 
Visit NBCNews.com for breaking news, world news, and news about the economy