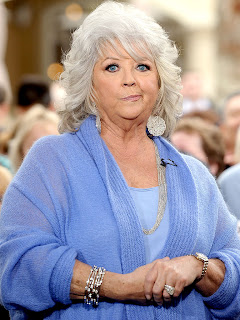 You're damn right. My heart is growing weary, very weary -- of people like Paula Deen denying their racism while making unacceptable racist comments and then having the temerity to try to brush their blatantly bigoted remarks off as some kind of joke.

I have no compunction to forgive this woman -- none -- and how dare anyone be presumptuous enough to expect it. I've heard this kind of crap most of my life and I'm really tired of the bigots saying they're not racist while they say these same kinds of things, and worse, over and over again.

I'm equally weary of the people who make lame excuses for those who make racist comments.  Examples from The Tennessean's Facebook page after an article announcing that Deen had been fired:

Bobby L. Kay: "this is absolutely ridiculous. Every southern white person of 40 years old or older has used the term if only in a joking manner. What is so terrible about this is the black guys I hung out used the term on a regular basis. News media gives somebody beside obama a break."

Melody Paxton: "Hypocrites. They need to get the liberals off their networks then. That road travels both ways."

I'm sure they paid no attention to my rebuttal that it has NOTHING to do with being liberal or conservative. And, NO, "every southern white person over 40 years old or more" has NOT used these terms in a joking manner. Furthermore, I really don't give a flying flip if black people use the n*%%#^ word. So? And, NO, Obama is not a racist and he had nothing to do with Deen getting fired.


Paula Deen, however, is an equal opportunity racist who has targeted gays, Jews and other groups and not just back in the good old days when she was an unknown and very poor entity.  According to her own words during her deposition:

I give the woman credit. She managed to raise herself from her poor white roots to being a media star with a great big smile, a thick southern drawl and big blinking blue eyes. The first word that has always come to my admittedly cynical mind when I've seen her photo is FAKE.

Deen represents all that I abhor about so much of what was the old South and what still is in far too many cases. But that's part of the trouble: she still lives in the past, or in the fantasy world that she has created from the past, and probably worst of all, she has forgotten her humble beginnings.


Deen made a pile of money off a certain idea of old-school southern culture. In return, she had an obligation to that culture–an obligation not to embody its worst, most shameful history and attitudes. Instead, in one swoop, fairly or not, she single-handedly affirmed people’s worst suspicions of people who talk and eat like her–along with glibly insulting minorities, she slurred many of the very fans who made her successful. She made it that much harder to say that Confederate Bean Soup is just a recipe.

. . . in the aw-shucks way she did in her deposition, Deen didn’t just insult black people and Jewish people and God knows who else. She insulted the present-day south and the decent people in it; she insulted the fans who wanted to like her food and TV shows and not be embarrassed; and she insulted the home-and-hospitality culture she purports to stand up for. Yes, food is food, no matter your color or creed. But it doesn’t matter how much butter and batter you coat it in, ugly is still ugly.

Next order of business: fire all the public servants who make unacceptable racist comments. That would be half of Congress and the majority of state legislators, at least in the South.