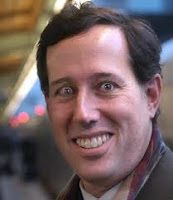 Rick Santorum was only about about five or six in 1964, so he probably wasn't watching television on that Labor Day night when NBC aired the film "David and Bathsheba" starring Gregory Peck and Susan Hayward.  It's also safe to assume that he missed one of the most iconic and infamous political ads ever shown. It was only aired once, but by the time ABC and CBS covered it on their news broadcasts, 80 percent of the electorate had seen the little girl counting as she pulled the daisy petals.

Louisiana State University communications professor Robert Mann is the author of "Daisy Petals and Mushroom Clouds: LBJ, Barry Goldwater, and the Ad That Changed American Politics.” In an interview last October, he told ABC News, "The ad essentially created a new genre of political communications that would appeal to the emotion of viewers, not just their intellect." The video can be viewed on the ABC link.


This was the first creative use of political advertising. Before this campaign that Johnson embarked on in 1964, presidential campaigns and politicians in general didn’t advertise themselves using creative advertising principals. They basically used abbreviated versions of their campaign speeches,” he said.

This is the beginning of what we see in political campaigns, appealing to emotion, and particularly the emotion of fear.

He went on to say that the time is ripe for another revolution in campaign advertising, quite possibly in 2012, as producers attempt to break from a "very formulaic" look to make their candidate's message pop.

Just five months later, Santorum's creative campaign wunderkinds obliged the good professor by producing a "trailer" (the first of several ads geared toward the Internet) that should certainly make everyone's eyes "pop." Called "Obamaville," it is the epitome of a horror flick, which is defined as "a movie genre seeking to elicit a negative emotional reaction from viewers by playing on the audience's most primal fears." They "deal with the viewer's nightmares, hidden worst fears, revulsions and terror of the unknown."

When he posted it on Facebook, friend, scholar, theologian and author* Frederick Stecker described it thus:


Santorum is warming up the Republicans with this the first of many video clips about the future should Obama win the next election. The use of fear is not an uncommon tactic of the right...themes of Armageddon, terrorism, a narrator (sounding like Rod Serling on the "Twighlight Zone") whose voice shakes in amazement at what is left of America: lost children, broken school recreational equipment, bankruptcy, suicide with a gas pump nozzle, empty hospitals, no one to care for the elderly, etc. The voiceovers, music and pictures are meant to bypass the reasoning (pre-frontal cortex) section of the brain and stimulate the Amygdala...the part of the brain that registers our immediate response to fear. It says in essence the end of the world (the Rapture) or Orwell's 1984 is right around the corner if Obama is reelected. Shown enough times it will become cemented in our subconscious as a real prediction of what will happen. It is effective because it works, but it is a dangerous move by a party touting a safer future for us when they and the banking industry are responsible for getting us in this situation in the first place.

I'll carry it a few steps further. It is dangerous, period. It is horrific, but probably not in the way the Santorum crew intended. It is, quite simply, the most appalling and despicable campaign ad I've ever seen in my lifetime. Yes, even worse than LBJ's. No wonder it was produced with the Internet in mind. I don't even think the breeders of fear and mythology  at Fox would touch this.

*Frederick Stecker is the author of the recently released book, "The Podium, The Pulpit, and the Republicans: How Presidential Candidates Use Religious Language in American Political Debate." One reviewer writes, "This book provides a vital understanding of political rhetoric which breeds fear and intolerance arousing the primitive and irrational within us. Citizens should use this book as an important guide." Follow this link to read more such reviews.
Posted by Leslie Parsley at 3/26/2012 06:07:00 PM