Tennessee Current Events: Back to the Future 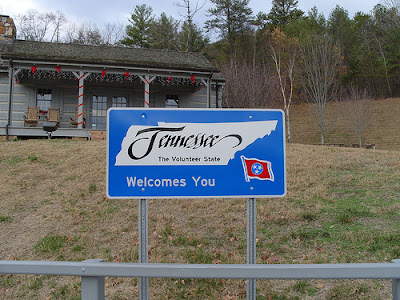 Tennessee welcomes you. Indeed it does. Unless you're gay, poor, have special needs, or discriminate against Christians.

I'm at the point that when someone asks me where I'm from, I can lie like a dog without batting an eyelid. Boston, Seattle, New York City, San Francisco, Denver. Take your pick. Anywhere but Anytown, Tennessee.

Don't get me wrong. I love my state. The scenery is stunningly beautiful, but I swan you-all, something besides manure must be getting mixed in with the fertilizer because our legislators seem to be going bat shit crazy and the populace either approves or is in la-la land after sippin' too much moonshine.

Not satisfied with pushing legislation prohibiting saying "gay" in public schools, and requiring teachers to inform parents when their kids are gay, and another bill proposing that food be snatched away from kids on welfare if their grades are unsatisfactory, Republican State Senator Stacey "Don't Say Gay" Campfield is now backing a bill that would allow graduate students in psychology to opt out of "having to counsel LGBT patients."

Tennessee Homophobe-In-Chief Campfield and his Aide-de-Camp Joey Hensley also argue that gay students should be offered so-called reparative therapy, despite the fact that the Human Rights Campaign, the Southern Poverty Law Center, and the American Psychological Association consider it dangerous, harmful and unethical.

Of course this august body of homophobes gets plenty of ideas and support from the Christian Right in it's drive to keep the state's citizenry straight and narrow. A bill now working its way through chambers would take away the right for Vanderbilt University police to make arrests. According to The Tennessee Family Action Council, an Evangelical Christian group led by David Fowler, "the university's nondiscrimination policy discriminates against religious Christians." How so? "Because the policy forces campus sanctioned Christian organizations to allow gay people to join them."
Is it any wonder that Tennessee ranks in the bottom ten for the number of high-school graduates? But wait, other geniuses in the state assembly have a solution. Let the private sector take over the running of the schools by offering vouchers. So what if the poor and special needs students get left behind?

No wonder teachers are so unhappy.

At the rate this state is moving forward - or backward - it's just a matter of time before the legislature bans teaching in classrooms altogether.

ADDITION: This pending piece of legislation has nothing to do with gays or education but the impact on attracting new businesses to our state and perhaps encouraging the ones already operating to move on could prove disastrous to our already struggling economy. According to the 2010 census Tennessee ranks 8th from the bottom of the barrel among the 50 states in poverty.